BJ
Hi, Welcome to my Blog. I'm an avid crafter; Scrapbooking, Cards, ATCs, Tags, Altered Books, Art Journaling, Décopatch, Knitting, Crochet, and Embroidery amongst other things. I live in Surrey, UK with my husband and son. For exercise I play badminton and I have been Geocaching since 2009 and now and again Pokémon Go. I go to Ballroom and Latin Dancing too. I run a UK based on-line papercraft group. 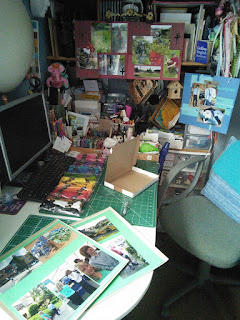 My desk today, colour candy threads gifted via Streetlife from a lovely lady who happened to live just round the corner from me.

The start of my 13th Scrapbook album, I'll need a new shelf for more....

And a box my husband thought I'd like despite the fact that I have just sorted and thrown out all the various boxes which had accumulated under my desk to accomodate the new PC! Hmmmm! 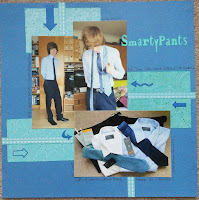 Anyway my scrapbook album started with a page of my son's new "smart" clothes he needed for his work experience during the Summer.

Possibly for interviews for university too, although I think they seem to have done away with the latter these days!

The first double LO is of some geocaching focused on the statue of Dame Margot Fonteyn which is just down the road in Reigate. 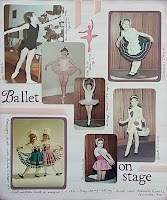 This got me thinking of my own ballet career which I blogged earlier in the week, here >>> Ballet

My first ever photo album (the sticky back kind) is rather shot and the photos wouldn't stick back in after I took them out to check the back for possible dates, so I made a scrapbook page to fit in the original album which I could stick back in. 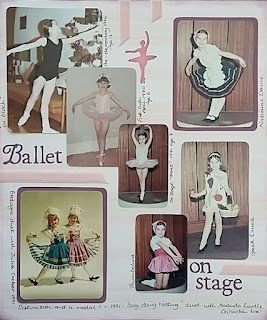 I have always loved to dance, it's like singing with your body.

I started Ballet classes around 4yrs and continued until about 14yrs.

I got my first and only tutu in April 1970 when I was just 6yrs, it still fitted me the following year although you can see my hair had grown somewhat.

I not only did Ballet, but also Tap, Modern, National and Greek dancing. I was often on stage in competition or productions. I remember being in Thumberlina and Snow White. I was a bunny in the latter (thankfully no photo!!). This was all when I lived in South Devon in the early 70's.

I have 4 certificates to show my achievements. I won a medal and distinction for my Bretagne Duet with Julia Creber and also a distinction for our "Busy Doing Nothing" duet with Amanda Rundle in the same year 1971. 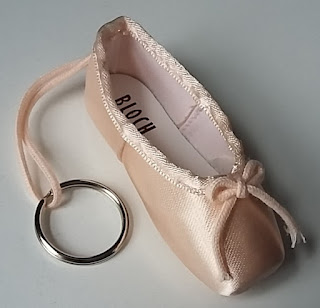 I auditioned for the Royal Ballet School and got to the last section but didn't get a place.

I got up to Pre-elementary in my Ballet Exams and was just into Pointe Ballet Shoes when we moved house/area and I gave up.

I gave my pointe shoes away to a friend's sister, something I now regret. 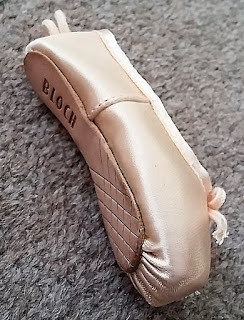 However I found a keyring shoe in a dance shop the other day. It is made the same way as a real shoe and I love it.

I remember Ballet with fondness and still love to dance and find I now live just up the road from the birthplace of Dame Margot Fonteyn.

In my late 20's/early 30's I did Ballroom and Latin dancing at Peggy Spencer's Dance Centre in Penge and recently I have taken up Line Dancing. 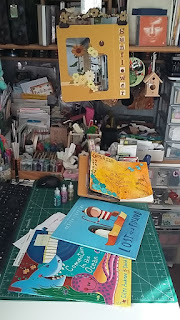 Here's my desk today. Just got a couple deliveries, 2 books for preschool and 3 stickles.

The stickles colours are:- Lagoon, Gold and Raspberry Tart.

The Raspberry Tart isn't exactly what I was expecting as the basic pink colour is flecked with holographic blue a bit like the Crystal.

My makes for this week are, a tag for a SWAP. 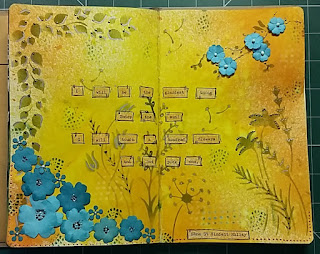 Then I used the left-over flower diecuts for a journal page and one of my favourite poem quotes by Edna St. Vincent Millay.

I will be the gladdest thing under the sun!
I will touch a hundred flowers and not pick one. 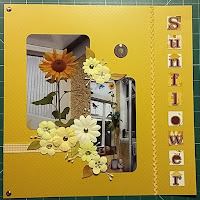 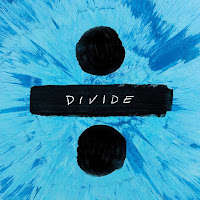 PS And my favourite music of the moment is Ed Sheeran. I downloaded his latest 2 singles and have pre-ordered his new album due out on 3rd March called Divide. Oh YES! 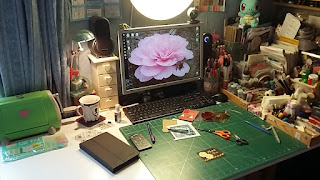 Guess what's changed on my desk?

If you can't spot it - the answer is here.

Saw another desker use a panorama so I have done the same with my craftcorner. 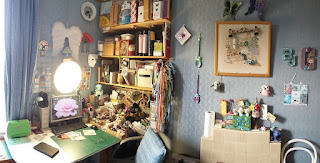 I have done quite a bit of crafting this week but had to pack it up for my Mum's birthday which is today.

I made her a mini album of my son's "learning to drive adventure" which she financed. 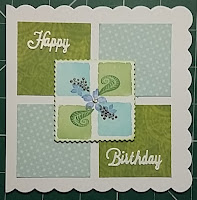 The last page has two hidden tags which we wrote our thank yous on.

I also made an ATC thank you and a card for my aunt's birthday next month. On a roll.

My desk has gone from craft to computer!

I acquired the computer by default from my Mum as she just got a new one. We bought a few new parts and my husband updated it for me. 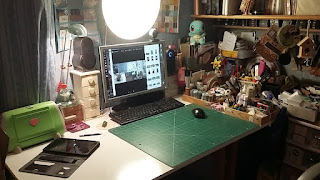 I used to have a laptop but it died sometime after I got my Nexus 7 tablet in October 2013 so I have survived with just that and the use of the main PC as and when...

I did get my first smartphone last April so now I have my very own PC as well. Much easier to write my blog on a proper keyboard with a bigger screen.

Only problem is I have a lot of crafty stuff to find homes for now - oh well.

Up side is I will be doing more stuff with my SAD light which can only be good at this time of year. 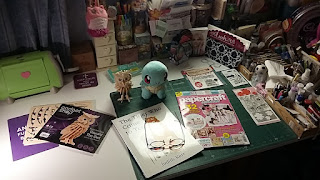 
Gosh, I've not blogged for 4 weeks but here I am again.

On my desk are some dies (bought/freebies). 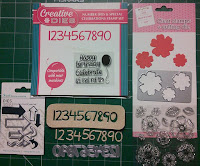 My SWAP challenge this month is to make something with New Stash so hopefully I'll be able to show something before long. 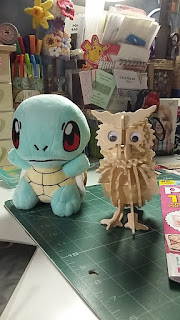 I did make up the wooden owl last night which was a gift from a friend for Christmas.

Next to him is my Pokémon Squirtle toy from my son.

The "Lush" album is awaiting the photos of my son and his new little car. My Mum bought him his lessons and the car so I'll be making the album for her. Not sure I'll manage it for her birthday on 11th though - come on Photobox 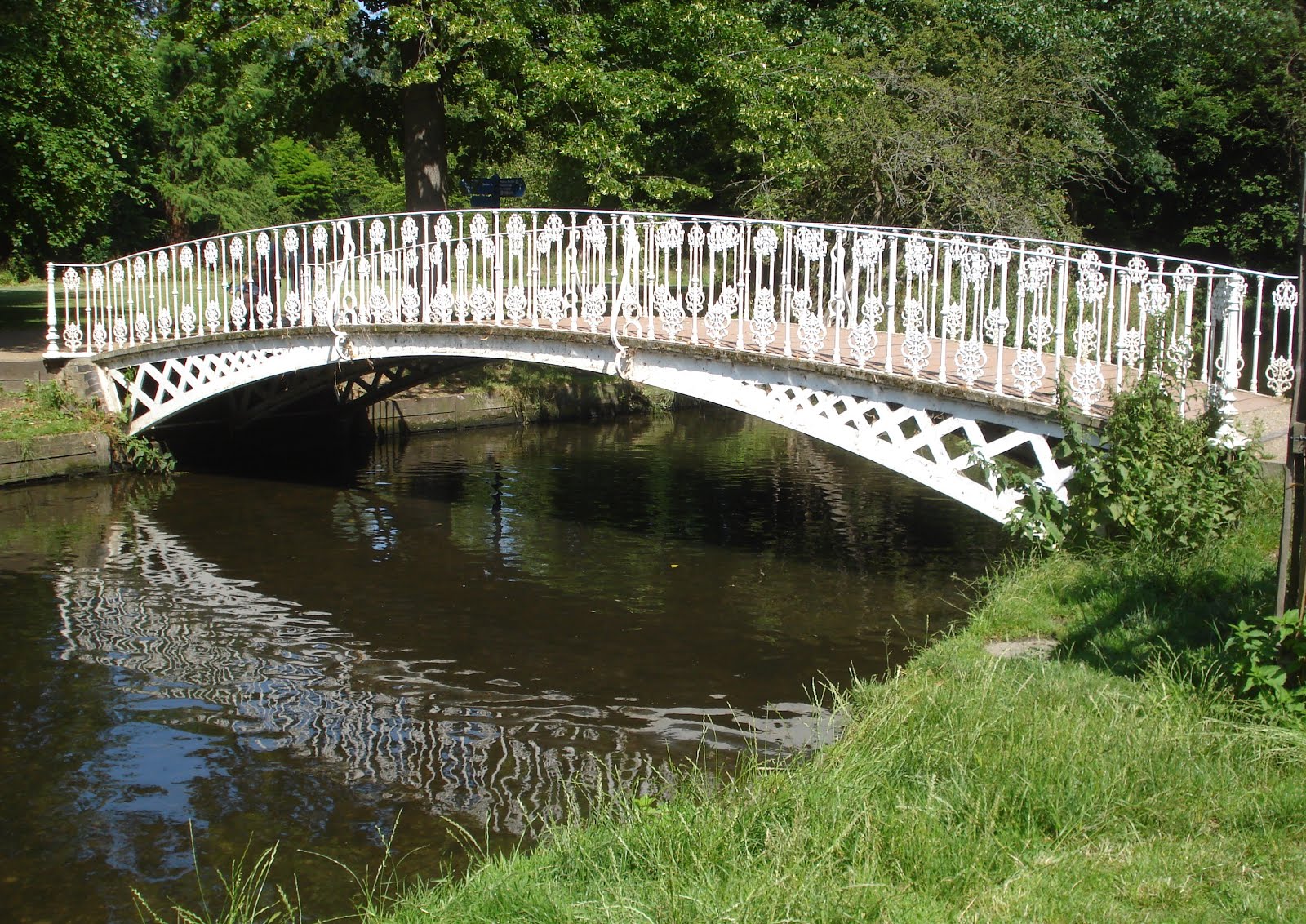 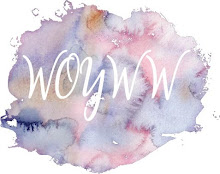